He Came to Us!

This time of the year the world suffers from a conditioned called commercialism  The prospect of spending liberal amounts of cash and accumulating debt is irresistible to many. As a society we are utterly stressed because of the self imposed burden of making purchases and being Christmassy. In the midst of all the music, scheduling, waiting on direct deposits and just flat out overdosing on the urge to satisfy the silent obligation to buy for friends and family—please remember that Messiah came to earth. 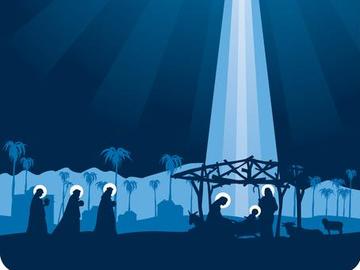 Implications of the Incarnation

The all important question of the true meaning of Christmas is answered repeatedly in the pages of Scripture. There are many who’ve never critically asked the question, but yet feel comfortable providing an answer to this pivotal question. What follows is a list of important things, but nothing on the list could be labeled redemptive. Some say family, friends, being together, food, etc. All these are important, but they miss the essence of the season. An awareness of the actual problem of our world will lead to a correct answer. Romans 3:23 says, “For all have sinned and come short of the glory of God.” The problem is that none of us are innocent and therefore we are, in some way, part of the problem. Additionally, our Creator cannot ignore disobedience and therefore there must be a reckoning of every deed committed in secret or in public view. God’s judgment awaits those who transgress His laws.

The incarnation means that hope would be available to men and women from every land, languages and lifestyle. Light shinned into darkness. (John 1) So God rectifies our problems—He comes down to straighten up our mess. The child named Jesus would grow, disciple many and ultimately take our place and give His life for those who have shouted and would shout, “Crucify Him!” There are five aspects of the Advent of Christ that should be celebrated during this time of the year.

His birth made possible our personal salvation. Our souls are saved because Christ gave His life. He cried out from the cross “it is finished” and as a result we stand complete in Christ. We have been seated in the heavens because God decided to love us unconditionally and chose us by His mercy. Those who believed in the gospel of Jesus Christ, specifically that He died for our sins, was buried and arose again will enjoy His presence for eternity (1 Corinthians 15). His resurrection rendered sin, death, and Satan powerless and ultimately defeated (Romans 8). Our personal decisions matter and our response to the invitation of Christ has eternal ramifications. We are individually called to be disciples of Christ. We are invited to make a personal decision for Christ and submit ourselves daily to His Lordship (Romans 10:9-10).  We will stand before God alone. Redemption has a personal aspect, but it is not exclusively personal and this is something that many of us miss. Millions have been delivered from violence, addiction, promiscuity, self worship and every kind of evil because Jesus came to earth.

In Acts 10 Peter is sent by God to Cornelius’ house to deliver a message that this head of house sought and hoped for. He accepted Peter’s invitation and this resulted in him hearing about Christ and his household coming to faith in Jesus. This home would provide generations of individuals committed to being disciples of Jesus Christ. God can change families from slavery to idolatry, pagan ways and evil lifestyles that only destroy. Jesus serves families by working to bring parties together to reconcile their differences. The Biblical text contains an example of a family reconciling.  The two brothers Jacob and Esau is one such example.  Late in life these two were able to reunite despite the earlier infraction. The offense and the disrupted relationship that followed made the reunion years later so much sweeter (Genesis 33:1-20). God is in the business of making reconciliation a reality for those who believe that it is indeed possible. In the city, there is a culture that is unfamiliar with the Biblical family structure. Many children have no idea that God’s design was that a mother and father would raise them; instead, they are raised by daycare providers, grandmothers and worn out mothers trying to hold onto a youth that is fading. He is able to reform the destructive models that we’ve come to accept as the norm. God is able to do amazing things despite the increase of divorce and single parent homes. Those that have come to know Christ have been brought into a family–Jesus calls us brethren and with that new relationship we have new identity, inheritance and intimacy (Hebrews 2:11).  These are the advantages of being adopted into a new household. There is no dysfunctional family in the world that is beyond God’s healing hand.  Jesus came to reconcile broken relationships.

Jesus arrives on earth outside of the comforts of a home in a manger filled with animals. The Creator among His creation (Isaiah 7:14). His birth was punctuated by the presence of shepherds. Their presence at the virgin birth provides a strong suggestion to the nature of His ministry on earth. He served outside of the palace with those who were marginalized and oppressed (Mark 2:15-17). His early years were on the run in Egypt escaping a dictator set on killing Him (Matthew 2:13). The Romans ruled Israel and their oppression was compounded by the hypocritical regulations of those gatekeepers of the Mosaic law, the Pharisees. Jesus confronted the establishment on many occasions and His challenges ensured His death.  He confronted the hegemony of the privileged by openly preferring those who were on the margins. He sympathized with their humble position in life and their need to be saved. We often limit salvation to a personal relationship, but salvation also consists of freedom from the oppressive conditions of society.  His early followers would reach the same people he reached; the poor, diseased, crippled, women, children and those who were captive to the slavery of sin. Individuals, families, neighborhoods, communities and whole nations would be changed because of God coming in the flesh. Jesus came to let us know that the kingdom of God is here to reverse our cultural norms.

The scope of God’s plan of redemption is global (Acts 1:8). God’s descent into the world was for much more than Israel. He loves Israel and has made certain promises to Israel that He  intends to keep. It is equally important to remember that He not only loves Israel, but also loves the world–so much so that He has been dealing with the, “…utter most parts of the earth” through His representatives in the world, namely the church, since His resurrection. Jesus ministered locally in Israel, but goes global and we see this global mission unveiled in the book of Acts.  ‘The church gathered becomes the church scattered’ as the boundaries of ethnicity, economics, education and gender are broken down and re-framed in a manner that glorifies God. Many of these points of distinctions are not totally destroyed, but instead they are enhanced under the Lordship of Christ. For example, it is OK to be comfortable in our ethnicity if it does not become an idol that separates or is used to oppress others who are different. The Apostle Paul provides a good example of a Jewish man who was called to reach Gentiles, but his heart  was broken for his people Israel and their salvation (Romans 10:1-4). We must realize that our identification with Christ takes precedence over our heritage (Galatians 2:1-21). The paradigm for the church must be global—outside of the four walls into the distant and the near. His birth signals the tearing down of the dividing wall of separation between the Jew and Gentile. Jesus came to earth and made it possible that we can be one in Him.

The invisible battle that rages between spiritual forces is not just ancient, but it is also a present reality. The prophet Daniel peaks into this invisible and observes the extent of God’s rule and reign.  The archangel, Michael, was sent to deliver a message to Daniel, a servant of God who prayed about the future of his people Israel. The messenger of God was delayed because of another spiritual being identified as the ‘Prince of Persia’; a demonic being bent on subverting God’s will. In spite of the altercation, Michael was able to deliver his message to Daniel (Daniel 10:1-21). There are other instances within the Biblical text where the veil between the material and eternal has been pulled back and God’s servants have been able to view the grandeur of the heavenly host (Isaiah 6; Joshua 5:13-15).  Elisha comforted his servant despite being surrounded with the pronouncement that “Those who are with us are more than those who are with them” (2 King 6:16). The Lord opened Elisha’s servants eyes to see the invisible army of God who were ready to secure the victory that day. The clash between the spiritual forces of God and Satan are going on–even now (Ephesians 6:10-18). These clashes still continue despite the reality that victory has already been secured by Christ on the cross (Colossians 2:15).  At the cross Jesus defeated Satan and his forces–he does not have power over the life of those who call on Christ as Lord and Savior. There are more battles to come, but remember that we are free from the god of this world. He came to destroy the works of the devil (1 John 3:8).

The Deliverer came to rescue those who have been enslaved to sin all their lives. He descended to earth and then ascended back to the Father only after He rendered powerless the enemy of our souls.

1 Corinthians 15: 50-57, The Apostle Paul sums up the season and why it is so much more than we sometimes acknowledge.

The sting of death is sin, and the power of sin is the law.  But thanks be to God! He gives us the victory through our Lord Jesus Christ.”

James Cone at the Free Library of Philadelphia »
« Refocusing the Image

One thought on “He Came to Us!”