Jesus said to the angel of the church in Philadelphia;

…These are the words of him who is holy and true, who holds the key of David. What he opens no one can shut, and what he shuts no one can open. I know your deeds. See, I have placed before you an open door that no one can shut. I know that you have little strength, yet you have kept my word and have not denied my name. (Revelation 3:7-8)

The African American church represents various things to many, but one universal irrefutable common characteristic is its strength in the face of oppression. Oppression is noticeable to those familiar with its sting. Sadly, many place oppression in the same category as global warming—a negotiable reality. An inconvenient truth is that slaves walked the streets of Philadelphia. In this city former slaves Richard Allen and Absalom Jones were disrupted from prayer but responded by establishing a unique translation of the church. (Genesis 50:20)  Their response came to be known as the Black church in America. This institution was a response to an oppressive system designed to distinguish Africans as individuals unworthy of real community. A door forced open became a flood gate for change. Dark skinned residents wanted to worship without restriction and so they formally set out to establish liberated space.  Here is Richard Allen contemplating establishing new space for Black worshipers;

I soon saw a large field open in seeking and instruction my African brethren, who had been a long forgotten people and few of them attended public worship…I raised a society in 1786 for forty two members…We all belonged to St. George’s church….We felt ourselves much cramped;…We established prayer meetings and meetings of exhortation, and the Lord blessed our endeavors, and many souls were awakened; but the elder soon forbid us holding any such meetings; but we viewed the forlorn state of our colored brethren,  and that they were destitute of a place of worship. They were considered a nuisance. [1]

The result of the efforts of Allen and Jones is the establishment of Mother Bethel African Methodist Episcopal Church in 1791 and The African Church established in 1792, later known as the African Episcopal Church of St. Thomas. Prior to the establishment of Mother Bethel, Richard Allen and Absalom Jones established the Free African Society, an organization set-up to meet some of the social needs created by dominant class suppression. Oppressed people must be creative in their endeavor to meet the needs around them. Allen and Jones were able to step in and help a city going through a deadly yellow fever crisis. In this particular context planting a new church was a necessary step towards eventually destroying the much beloved American institution of slavery.

The elites of Philadelphia wanted a pure worship experience, free of their ‘other’, ‘less human’ neighbor.  These elites carried their Bibles alongside their accounting logs. These Philadelphian’s were prudent entrepreneurs who used others to accumulate and maintain wealth and status. These Quakers, Methodist and Congregationalist were all astute in their theological positions, but it must be said that they were also astute concerning their property; human and otherwise. Many of these religious explorers landed on shores desiring freedom from oppression, but once they achieved a desired order and stature they systematized a comfortable existence through the exploitation of others.

Allen and Jones seemed to recognize two key things; they could no longer acquiesce with the current church paradigm and serving their neighbor was both necessary and godly. The formal genesis of the African American church came out of protest and it just seems right that this would mark the practice of the contemporary African American church. This church was founded under the premise of ‘hearing and doing.’ Although many are convinced that the Christian life is best experienced following one’s favorite expositor or purchasing instructions to obtain the ‘anointed life’ or ‘coming up under’ a personality—in reality these preoccupations devalue the rich past that reach back to the example of both Allen and Jones. The fresh new fades that ‘chuch folk’ like to follow will not keep young black men and women from being tossed on the ash heap of urban life.  Allen and Jones decided against praying in their place, far away from the ‘others’. No more balconies carefully constructed to keep sensibilities intact all while deepening self community scars. These kinds of contradictions work in the world of artistic expression where colors and hues are bounced against one another but these contradictions strike a raw nerve for those enduring inequality and hypocrisy.  The St. George Methodist Episcopal Church of Allen’s day represented a kind of privilege that benefited those in the dominant class but disassociated the ‘other’.

The church needs to rediscover its past. Revisiting the early church we observe leaders willing to experience the discomfort of going where no one has gone before. Revisiting history through the experience of Richard Allen and Absalom Jones we observe real disciples willing to follow Christ into systems of injustice in order to establish ‘shalom’ where social and relational confusion shapes the ungodly narrative. These men were prophetic in their action—they recognized, like Elijah and Elisha, that working outside of the established system can be more Christ-like than the elites would have you to believe. Paradigm shifts can be beneficial. 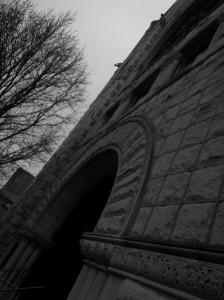 I recently had the opportunity to talk to some church planters in Philly and burbs about their efforts and why they’ve established new works in specific neighborhoods. Those who have spent any significant time in Philly will be aware that there seems to be a church on every corner. I’m sure there are some who would suggest that more churches are unnecessary. I would have to agree—we don’t need any more buildings occupied by concert goers or preacher groupies. However, there is a real need for liberated space where those in real need can come in contact with the Savior and find freedom. Its sad that there are places in this great city where the burdens of tradition are heaped onto the backs of wearied people. Folk need freedom from sin and stale expressions of religion. What if there were ministries grounded in sound Biblical teaching, authentic community and vibrant worship of the Savior?  What if there were churches not afraid to ask questions and listen in order to meet real tangible needs knowing that we must not only share good news but be good news.?Imagine a city that produced men and women who recognized the culture and demographics of neighborhoods and held a strong commitment to Christ and understood that a marked up Bible does not necessarily equal real discipleship or Christ like living but “Religion that God our Father accepts as pure and faultless is this: to look after orphans and widows in their distress and to keep oneself from being polluted by the world.” (James 1:27)

We need leaders who understand what systemic injustice looks like in all its forms and are not afraid to claim that Jesus speaks to real social issues that black people face as a perpetually marginalized people. The boldness to found the Free African Society proved instrumental in the effort to establish shalom for a broken people. Allen and Jones were the fathers of a prophetic Church. What is remarkable is that these two and those who followed their leadership did not give up on the church. They were able to establish the church as a tool for liberation rather than one of persecution and prestige.

2 thoughts on “Liberated Space: The Black Church in Philadelphia”